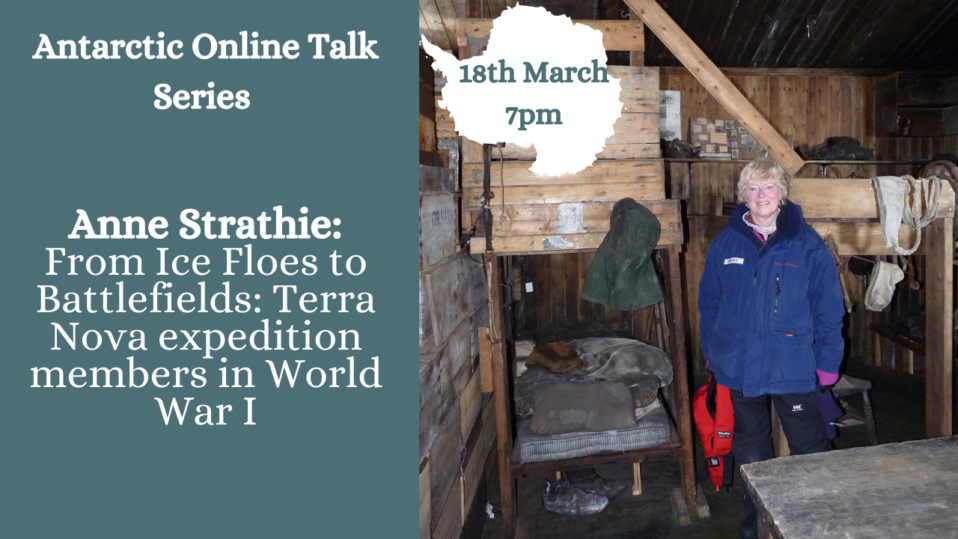 A LINK HAS NOW BEEN SENT TO TICKET HOLDERS FOR TONIGHT’S EVENT. ANY NEW TICKET BUYERS WILL RECEIVE THE LINK AFTER 5PM TODAY. IF YOU HAVE NOT RECEIVED YOUR LINK PLEASE EMAIL INFO@GILBERTWHITESHOUSE.ORG.UK. PLEASE BEAR IN MIND THAT IF YOU RING THE MUSEUM IT IS NOT GUARANTEED THAT SOMEONE WILL BE IN THE OFFICE.

From Ice Floes to Battlefields: Terra Nova expedition members in World War I

Anne Strathie is the author of Birdie Bowers: Captain Scott’s Marvel and From Ice Floes to Battlefields: Scott’s ‘Antarctics’ in the First World War. Since Anne became a full-time writer her research and speaking engagements have taken her all over Britain and far beyond, including to Antarctica.

Anne Strathie will talk about ‘what happened next’ to Oates’ expedition companions and how his death inspired men on the Western Front. When Lawrence Oates joined Scott’s expedition in 1910, he was the only army officer and one of few expedition members who had seen armed conflict. By 1919 almost all Oates Terra Nova companions had seen action and several had died.

Other Talks in this series

25th March: Monitoring the heartbeat of the ocean – The work of the Continuous Plankton Recorder Survey

Your ticket for the: Online Antarctic Talk: From Ice Floes to Battlefields: Terra Nova expedition members in World War I