Online Antarctic Talk: Monitoring the heartbeat of the ocean – The work of the Continuous Plankton Recorder Survey 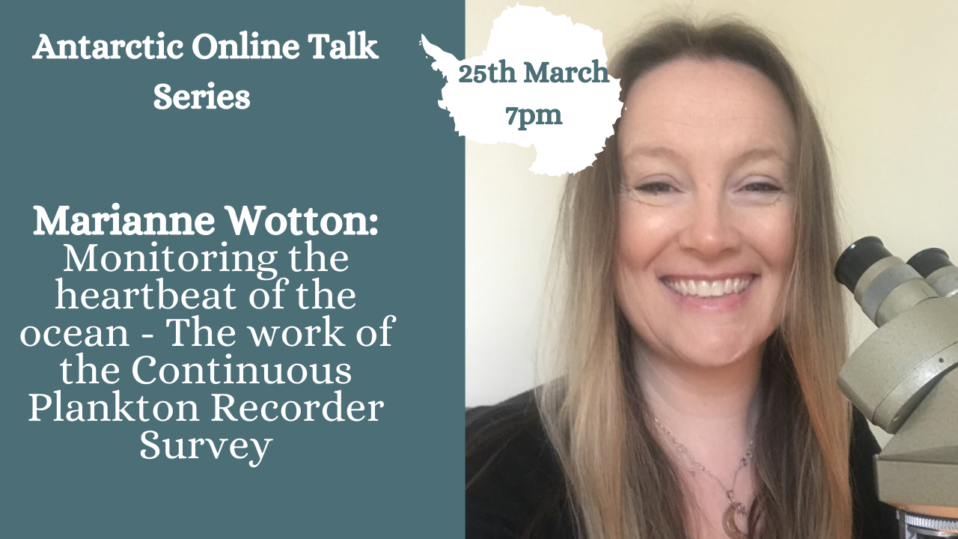 Marianne is Senior Analyst at the Continuous Plankton Recorder Survey, based in Plymouth.  The CPR Survey is the longest running, and most geographically expansive marine biological survey in the world. Marianne is co-author of a plankton guide to the North Atlantic.

Plankton play a key role in the Earth’s systems: they provide us with oxygen, are essential for fisheries and are involved in carbon drawdown to the deep ocean.   Being at the base of the marine food web, these tiny organisms can be a key indicator of ecosystem changes in our oceans .

The CPR was developed by Sir Alister Hardy in the 1920’s, during his voyages in the Southern Ocean onboard the RRS Discovery.  The primary purpose of the CPR Survey is to record plankton, which it is has been doing so since 1931. Having recently sampled an amazing 7 million nautical miles from the around the globe, the Survey continues to provide data and advice to scientists and policy makers on a diverse range of subjects, from climate change and ocean acidification to marine micro-plastics and pathogens.

Join us as we celebrate the CPR Survey’s 90th anniversary.

Other Talks in this series

Register for Event: Online Antarctic Talk: Monitoring the heartbeat of the ocean – The work of the Continuous Plankton Recorder Survey

Your ticket for the: Online Antarctic Talk: Monitoring the heartbeat of the ocean – The work of the Continuous Plankton Recorder Survey

Online Antarctic Talk: Monitoring the heartbeat of the ocean – The work of the Continuous Plankton Recorder Survey