Part 5 of our Retracing the Footsteps of Amundsen and Scott series written and researched by volunteer Anthony Fogg.

As we begin to enjoy the freedoms of a looming Northern Hemisphere summer after a long winter, some of it confined and restricted, the Southern Hemisphere heads towards winter. In mid-April 1911 Scott’s Terra Nova expedition and Amundsen’s Fram expedition were preparing for their own winter lockdowns. They had plentiful supplies, but the extreme cold, darkness, isolation and being confined together in limited spaces meant they would also experience and endure psychological hardships. Both expedition leaders were aware of the impact on morale such circumstances could have and planned accordingly. There was much to do preparing for the forthcoming trips to the South Geographic Pole, but there was also time to indulge in reading, entertainment and bon viveur.

Fram: Amundsen writes: “What my comrades thought about the winter that was approaching I cannot say; for my part, I looked forward to it with pleasure……..the blacker and more stormy the winter night might be, the greater would be this feeling of well-being inside our snug little house.”

Fram: 19th April: Amundsen writes: “we saw the sun for the last time….. It was intensely red, and surrounded by a sea of flame, which did not disappear altogether until the 21st. As far as the hut was concerned, it could not be better”, but he also confesses “we had forgotten to bring out a tool which is commonplace necessity on a Polar expedition – namely, a snow shovel.” The team had to improvise and use some iron plate to fashion “a whole dozen of the very best spades”.

Terra Nova: 23rd April. Scott writes: “Winter Quarters. The last day of the sun and a very glorious view of its golden light. I begin to think we are too comfortable in the hut and hope it will not make us slack, but it is good to see everyone in such excellent spirits – so far not a rift in the social arrangements.” 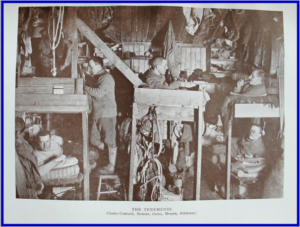 Fram: 27th April: Amundsen writes: “-48 degrees C. It has been rather cold today”

Terra Nova: 28th April. Scott writes: “The temperature remains about -15C. Today I have organised a series of lectures for the winter; the people seem keen and it ought to be exceedingly interesting to discuss so many diverse subjects with experts. We have an extraordinary diversity of talent and training in our people. We find one hut contains an experience of every country and every clime. What an assemblage of motley knowledge!”

Terra Nova: 5th May. Scott writes: “One sees Wilson busy with pencil and colour box, rapidly and steadily adding to his portfolio of charming sketches. Simpson, master of his craft…doing the work of two observers at least…the current meteorological and magnetic observations are taken as never before by Polar expeditions. Atkinson is quietly pursuing the subject of parasites. Oates’ whole heart is in the ponies. He really is devoted to their care, and I believe will produce them in the best possible form for the sledging season. 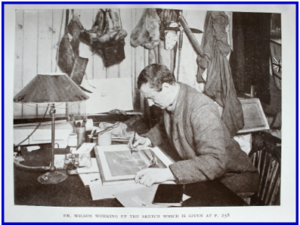 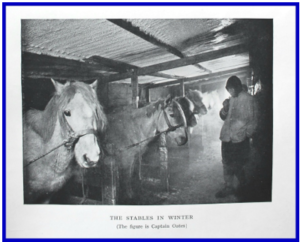 Fram: 5th May: Amundsen writes: “-27 degrees C. It feels quite mild now. Completed the digging out of the room for the storing of our sledging cases. This magnificent building (4m square and 2m high) has been given the name Crystal Palace. We have also taken out the American puzzles and the German puzzles (that were gifts) and amuse ourselves tremendously with these. When we are off work, we can spend hour after hour with them. We have now begun to guess the temperature every morning. I keep a full account of these guesses. Whoever guesses correctly the most times during the month is given a prize of five cigars.” 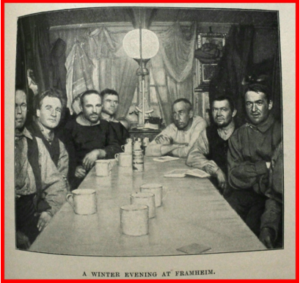 Fram: 8th May: Amundsen writes: “The moon reappeared today. It will be a good friend now. We have the Southern Lights all the time. We are all enjoying ourselves now. Our dogs as well. They gain weight constantly. One day they get meat, the other day fish.”

Terra Nova: 8th-9th May. Scott, in one of his lectures to the party, related that “I could not but hint that in my opinion the problem of reaching the Pole can be best solved by relying on the ponies and man haulage. With this sentiment the whole company appeared to be in sympathy. Everyone seems to distrust the dogs when it comes to glacier and summit”.

Terra Nova: 16th May. Scott writes: “The north wind continued all night but dropped this forenoon. Conveniently it became calm at noon and we had a capital game of football.”

Fram: 16th May: Amundsen writes: “Our daily life is ordered like this. The Lux lamp is lit at 6.30am, everyone is woken up and gets ready for breakfast at 8am. However, most of us go outside a little way and untie our dogs. There is a cry of jubilation when one arrives in the (dogs) tent. Then when they are released we go inside to get our lovely coffee and fresh and indispensable hot cakes. Work from 9-12. Dinner from 12-2. Work again from 2-5.15, when the dogs are tied up again. We are finished at 6pm and after that eat supper. At 10pm we all go to bed.” 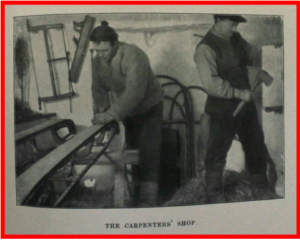 Terra Nova: 21st May. Scott writes “Tonight we had a glorious auroral display – quite the most brilliant I have seen”

Terra Nova: 26th May. “We are living extraordinarily well. At dinner last night we had some excellent thick seal soup; this was followed by an equally tasty seal steak”.

Fram: 3rd June: Amundsen writes: “Our bathroom was finished today. It is much superior to public baths. We are scrubbed clean and shaved and have had a toddy, cigar and music. We finish with a bit of reading.”

Terra Nova: 4rd June. “A typical Sunday would run as follows: Breakfast. A half-hour or so selecting hymns and preparing for Service whilst the hut is being cleared up. Wilson strikes the note on which the hymn is to start and I try to hit it after with doubtful success! After church the men go out with their ponies. Sunday afternoon for the men means ‘a stretch off the land’. Ponting has been out to the bergs photographing by flashlight.”

Terra Nova: 6th June. “It is my birthday, a fact I might easily have forgotten, but my kind people did not. At lunch an immense birthday cake made its appearance and we were photographed assembled around it. Clissold had decorated its sugared top with various devices in chocolate and crystallised fruit, flags and photographs of myself. After my walk I discovered that great preparations were in progress for a special dinner, and when the hour for that meal arrived we sat down to a sumptuous spread with our sledging banners hung about us. Seal soup, roast mutton and red currant jelly, fruit salad, asparagus and chocolate – such was our menu. For drink we had a cider cup, a mystery not yet fathomed, some sherry and liqueur.” 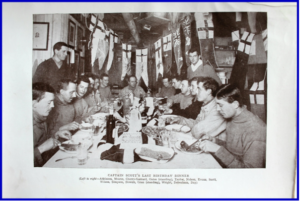 Fram: 7th June: Amundsen writes: “Still and snow. -14 degrees C. Big celebration; Independence Day and the anniversary of our departure. We decorated the living room with flags and did all we could to make this day festive.”

“In the hut preparations for a feast were going on… Everything was newly washed, and the table was gaily decorated. Small Norwegian flags were everywhere, on the table and walls. The festival began at six, and all the Vikings came merrily in.”

Fram: 16th June: Amundsen writes: “Although the lowest temperature outside this evening is -51.8 degrees C, our lowest yet, we sit here in the living room in our thinnest clothes, at 18 degrees C.

Terra Nova: 16th June. “Tonight Debenham lectured on volcanoes. His matter is very good, but his voice a little monotonous, so that there were signs of slumber in the audience, but all woke up for a warm and amusing discussion succeeding the lecture.”

Terra Nova: 22nd June. Mid-Winter celebrations. Seal soup followed by roast beef with Yorkshire pudding, fried potatoes and Brussels sprouts. Finishing off with a flaming plum-pudding and mince pies and a dainty savoury of anchovy and cod’s roe. And an unstinted supply of champagne and an array of liqueurs for the drinking of toasts. The men were also treated to a marvellous auroral display.

We drank to the Success of the Expedition. 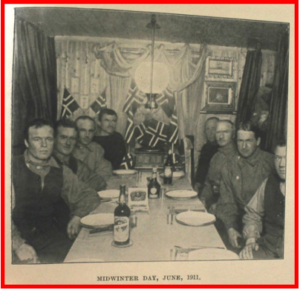 Fram: 23rd June: Amundsen writes: “Yesterday was the shortest day of the year. The sun now begins to return; that sun which hopefully will see our work accomplished. Both Midsummer and Christmas will be celebrated this year. This evening we have handed out presents and made everyone happy.” 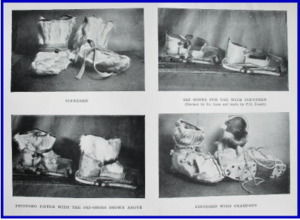 Terra Nova: 1st July. “We have designed new ski boots and I think they are going to be a success.”

Fram: 3rd July: Amundsen writes: “Southern Lights in tremendous draperies. It was a wonderful sight. It was as though, with its power and expanse, it would do battle with the dawn as to who should come first. This part of winter has gone in a flash. Constant work in comradeship and cooperation…. It is certain that not one of us has the slightest doubt that we shall reach it. Everyone considers the matter decided.”

Fram: 21st July: Amundsen writes: “A little glass of whatever it is and a cigar are often better medicine than the whole medicine cabinet. Our cheese has kept wonderfully. Old Cheddar, Roquefort and Edam cheese. All our chocolate and cocoa have passed the test. All the jams and fruit have kept wonderfully too. From time to time we enjoy Freia’s chocolates. Yum yum. How good they are. Stavanger tin products are also excellent. Yesterday, Prestrud took photographs of us working in the living room.” 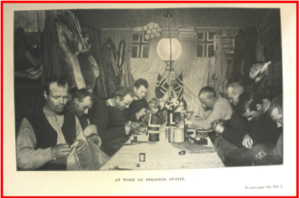 Terra Nova: 25th July. “There is really very little to be recorded these days, life proceeds very calmly if somewhat monotonously. Everyone seems fit, there is no sign of depression. The light comes on apace.”

Fram: 16th August: “We began to pack our sledges. It was a great advantage to be able to do this work undercover. The dogs did not like the cold weather we had now had for so long. They stood still and raised their feet from the ground in turn, holding each foot up for a while before putting it down again on the cold surface. They did not care very much for fish, and some of them were difficult to get into the tents on the evenings when they knew there was fish.”

Fram: 23rd August: Amundsen writes: “The polar journey has begun. Myself, I sprang ahead on skis and the seven sledges followed after.”

Fram: 29th August: Amundsen writes: “Have unfortunately been forced to postpone the departure. The temperature has fallen so far down that it would be wrong to continue such a long journey as this. -53C today.”

The weather had closed in. We’ll join the Fram expedition when they set off again for a second attempt on the 8th September.

Terra Nova: 10th September. Scott writes: “A whole week since the last entry in my diary. I feel very negligent of duty, but my whole time has been occupied in making detailed plans for the Southern journey. These are finished at last. If the motors are successful we shall have no difficulty in getting to the Glacier. I have tried to take every reasonable possibility of misfortune into consideration…..I feel that our chances ought to be good.”

Your ticket for the: Retracing Scott & Amundsen’s journey to the South Pole. Part 5