I very much regret having to tell you that Dr Rosemary Irwin MBE, Chairman of Trustees of the Museum from 2008 to 2018 died this morning after several months of illness. She had an illustrious career in education and her role as Chair of Trustees was transformational. WE owe her a great deal.

My fellow Trustee, Philip Geddes, worked with Rosemary for many years and adds this tribute:

When Rosemary retired from Marlborough College in 2008 she took over as Chairman. The Museum was in trouble financially and incapable of achieving its purposes. All but one of the cottages it had been endowed with had been sold, and the museum was nearly bankrupt; displays had not been changed for many years and visitor numbers were falling. She immediately started on a process of reinvigorating the Museum, and its displays, and raising funds to pay for this.

With the help of the Heritage Lottery Fund she raised £300,000 which was used to renew the Gilbert White exhibition in 2010. She raised a further £300,000 to renew the Lawrence Oates exhibition (which opened in 2012, the 100th anniversary year of his death). She led a small enthusiastic team of trustees, staff and volunteers in these exercises, showing infectious energy in planning and developing new displays. The result was a dramatic improvement in displays and a greatly enhanced experience for visitors, which in turn increased income.

In 2016 Rosemary led a major bid to Heritage Lottery Fund with the objective of refurbishing the parts of the Museum that had not been updated so far. This included a new car park, much better facilities for the garden team, a new exhibition to Frank Oates, a new more accessible library, and the restoration of Gilbert White’s 18th C stable yard and Brewhouse (thus creating a new entrance and much larger café for the Museum). The project was completed in 2017 and is attracting a much wider spectrum of visitors.

Rosemary did most of the fundraising herself, writing to dozens of charities and funds. She was always one to lead from the front. An example was the walk she has organised from Selborne to Oxford, and back, (following Gilbert’s regular route to Oxford). She personally raised over £30,000 through this walk.

Rosemary also devoted much effort to building effective partnership with outside bodies which could help the Museum. She built good working relationships with Hampshire County Council and East Hampshire District Council, and South Downs National Park, as well as supporting existing partnerships – with UK Antarctic Heritage Trust and British Antarctic Survey for example - both of which supported the various rebuilds of the Museum, and developed new ones. The Museum is now actively involved with the Natural History Museum in celebrating the tercentenary of Gilbert’s birth in July.

Rosemary was in the museum nearly every day to ensure the best possible outcome of the project. She was a highly effective leader of a team that includes volunteers and numerous professional specialists. She had huge leadership skills and led the team with determination, drive and humour.

Previously, Rosemary had a very distinguished career in education. In 1992 she was appointed Deputy Head of Marlborough College to oversee the transition from single sex to

mixed pupils throughout the school, which she did very successfully. Many of her pupils remember her with great affection as a superb and gifted hands on teacher.

In June 2018 Rosemary was awarded the MBE “for services to Education and to the community in Selborne”.

The Museum has lost an inspired leader who transformed its fortunes. Trustees, patrons, staff and her many colleagues down the years have lost a great friend who left her mark wherever she was. 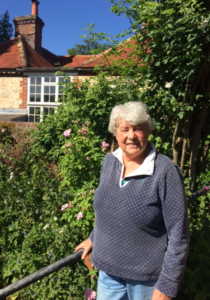 Your ticket for the: Dr. Rosemary Irwin