2020 has been a year where our health has been at the forefront, as we have watched the devastating impact that COVID-19 has had on the world. Over the year there have been many points where various members of the Gilbert White & The Oates Collections team have exclaimed ‘what would Gilbert have made of all this? Of course, we can never know for sure, but in the eighteenth century viruses where never far from peoples minds as outbreaks of Smallpox were rife.

By the mid-18th century, smallpox was a major endemic disease everywhere in the world except in Australia and in small islands untouched by outside exploration. In 18th century Europe, smallpox was a leading cause of death, killing an estimated 400,000 Europeans each year. In 1747 Gilbert White contracted smallpox, he was 27 and living in Oxford at the time.

It is impossible to know how White contracted smallpox which was highly contagious, but generally spread more slowly, than say COVID-19, possibly because transmission required occurred after the onset of the rash. Perhaps he contracted it whilst on clerical duties or maybe one of his Oxford friends had had it. The idea that smallpox was spread via droplets from the mouth or nose sounds all too familiar from the perspective of 2020. Smallpox could also be transmitted through objects such as bedding or clothing, so White caught it from the lodgings he was living in.

Nevertheless, in the October that year White began to feel unwell, like all other viruses the severity of the illness varied from person to person. At first, White would have felt like he had a cold or the flu coming on with a fever, muscle ache, exhaustion, and headaches, some also suffered from nausea and vomiting. After the first few day’s ulcers would appear in your mouth and throat, and your temperature would likely go back to normal. White would have then begun to see the characteristic pox marks appear, typically they would first appear on the sufferer’s forehead, spreading down the face, then across the body and finally down to the hands and feet.  The spread would only take a couple of days, after which no new lesions would appear. Generally, the whole process would be about two weeks, and the sufferer would be contagious until the last scab fell off.

Historically, smallpox had a fatality rate of about 30%, which is huge compared to COVID-19, and almost everyone would have been affected by the virus at some point of their lives, from Royalty to labourers.

We do not know to what extent White was affected, but we do have an insight into what he needed to get through his experience with Smallpox thanks to his accounts. Where we can see that his appetite was not too much affected by the attack.

Gilbert also had a nurse sent from home to care for him which must have been a comfort to have a familiar face to care for him whilst he was at his worse. By December it seems like White had recovered fully and not long after he gave up his lodgings in Oxford to live in Hampshire permanently. So perhaps the experience made him long for the fresh air and quiet of his home.

The after effects of smallpox are perhaps more famous than the illness itself, famously Queen Elizabeth I tried to cover the scarring left by smallpox with copious amounts of thick make-up and walking around eighteenth century England you would see face after face showing the tell tale signs of having had smallpox. There is some argument that perhaps one of the reasons we do not have a portrait of Gilbert White is because he was ashamed of his scarred face, however as Rashleigh Holt-White noted there is no mention of White being particularly scarred by any of his friends or family members, so we can say tentatively that White’s scarring wasn’t a noticeable characteristic of his appearance in later years.

However we do know that White had at least a temporary record of his battle with smallpox visible on his face, as John Scrope one of Gilbert White’s Oxford friends wrote this poem in 1748 not long after White’s illness.

The wealth and beauties of Pomona’s reign ;

The vegetable world engrossed his heart,

Where in the smoking beds high heap'd appear

But of each species sprung from seed or root,

The swelling melon was his favourite fruit ;

Other productions kindled some delight

In his fond soul, but here he doted quite.

When others wisely to the grot retreat,

And seek a friendly shelter from the heat,

Poring he kneels, and thinks he sees it grow.

One day when Phoebus scorch'd the gaping plain,

Striving to rise at length he strove in vain,

Fix'd to the spot, exchang'd his shape and name,

A melon turned and what he view'd became.

Ovid would tell you how his roughen'd face *

Retains the network and the fretty grace ;

His skin and bones compose the tougher rind ;

His flesh compressed retains its name and kind ;

Shrunk are his veins, and empty'd of their blood,

Which in the centre forms a plenteous flood.

The morning past away ; 'twas noon ; 'twas night ;

The servants own'd ; when one cry'd out ' I've found

' The secret now, he's in the melon ground,'

And straight ran thither, then he call'd amain,

The adjacent hills re-echoed to the strain;

But as he look'd about, ripe at his foot

A melon lay, just waiting to be cut :

He urg'd the fatal knife : when burst a groan

With words like these, 'you've stabbed your master, John.' 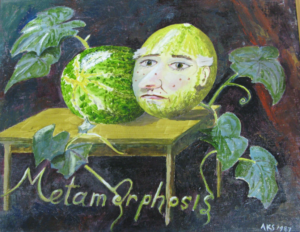 A 20th Century painting depicting Gilbert White with his smallpox scars visible transformed into a melon.

In this rather humorous and bizarre poem where Gilbert White himself becomes a melon, the reference to his roughened face shows that at least here, only a few months after his battle with the virus Gilbert White’s face was typically marked with scars.

But was smallpox so commonplace it was almost a rite of passage to have it some time or other, or were people, as they are now with COVID-19, trying to come up with ways to stop the virus in its tracks. The answer is of course yes, people had been trying to save people from catching this deadly virus for centuries.

Inoculation against smallpox started in Asia in perhaps as early as the 10th century, but certainly by the 15th century. In the 18th Century Lady Mary Wortley Montagu observed the practise in the Ottoman Empire and spent many years trying to promote the practise in England. In 1796 Edward Jenner invented the vaccination, after realising that those that contracted the milder virus cowpox did not seem to contract smallpox. This method was safer than inoculating individuals with smallpox itself as it bypassed the risk of contracting smallpox through the inoculation. However, this was after Gilbert White’s time. Eventually smallpox would be an internationally eradiated virus in the 1970s.

The idea of quarantine against smallpox was also in practise in Gilbert White’s life. In fact, on his way from Selborne into the nearest town of Alton he would have passed Windmill House, which was used to house those with smallpox, to keep them from spreading the illness further. Later the ‘pest house’ as it was called, was moved to the Butts in Alton nearer the town. Perhaps White thought back to his time as a young man, trapped in his Oxford lodgings unwell and miserable when he passed these houses on his way to and from town.

White was lucky that his experience with smallpox was not life threatening that he did not suffer any of lasting effects of smallpox other than the scarring, which likely faded with time. His experience however shows on the one hand how recognisable White would have found COVID-19 with the silent nature of the virus sweeping through communities, however it also shows how lucky we are that we live in an age where we understand viruses better, how we can quickly start work on vaccinations against the virus and work on keeping death rates at a minimum.

Your ticket for the: Gilbert White & Smallpox