Next week Gilbert White’s garden will play host to chapter house theatre company’s production of Shakespeare’s A Midsummer Night’s Dream. White doesn’t often refer to plays or fiction in his writings, but was well read, in letter three of The Natural History of Selborne Gilbert references Shakespeare and shows that the bard was often on his mind whilst he was studying nature! 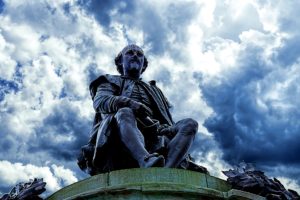 Letter III
To The Honourable Daines Barrington
Selborne, Jan. 15, 1770.
Dear Sir,
It was no small matter of satisfaction to me to find that you were not displeased with my little methodus of birds. If there was any merit in the sketch, it must be owing to its punctually. For many months I carried a list in my pocket of the birds that were to be remarked, and, as I rode or walked about my business, I noted each day the continuance or omission of each bird’s song; so that I am as sure of the certainty of my facts as a man can be of any transaction whatsoever.
I shall now proceed to answer the several queries which you put in your two obliging letters, in the best manner that I am able. Perhaps Eastwick, and its environs, where you heard so very few birds, is not a woodland country, and therefore not stocked with such songsters. If you will cast your eye on my last letter, you will find that many species continued to warble after the beginning of July.
The titlark and yellowhammer breed late, the latter very late; and therefore it is no wonder that they protract their song; for I lay it down as a maxim in ornithology, that as long as there is any incubation going on there is music. As to the red-breast and wren, it is well known to the most incurious observer that they whistle the year round, hard frost excepted; especially the latter.
It was not in my power to procure you a black-cap, or a less reed- sparrow, or sedge-bird, alive. As the first is undoubtedly, and the last, as far as I can yet see, a summer bird of passage, they would require more nice and curious management in a cage than I should be able to give them; they are both distinguished songsters. The note of the former has such a wild sweetness that it always brings to my mind those lines in a song in As You Like It,
And tune his merry note
Unto the wild bird’s throat.-Shakespeare.

The latter has a surprising variety of notes resembling the song of several other birds; but then it also has an hurrying mariner, not at all to its advantage; it is notwithstanding a delicate polyglot.
It is new to me that titlarks in cages sing in the night; perhaps only caged birds do so. I once knew a tame red-breast in a cage that always sang as long as candles were in the room; but in their wild state no one supposes they sing in the night.
I should be almost ready to doubt the fact, that there are to be seen much fewer birds in July than in any former month, notwithstanding so many young are hatched daily. Sure I am that it is far otherwise with respect to the swallow tribe, which increases prodigiously as the summer advances: and I saw, at the time mentioned, many hundreds of young wagtails on the banks of the Cherwell, which almost covered the meadows. If the matter appears as you say in the other species, may it not be owing to the dams being engaged in incubation, while the young are concealed by the leaves ?
Many times have I had the curiosity to open the stomachs of woodcocks and snipes; but nothing ever occurred that helped to explain to me what their subsistence might be: all that I could ever find was a soft mucus, among which lay many pellucid small gravels.
I am, etc.

Your ticket for the: Gilbert White & Shakespeare