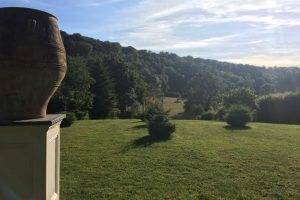 Volunteer and author Louis Coulson tells us about his very first visit to the Wakes.

As far back as I can remember I was interested in Nature, especially birds. To start with, there was A Bird Book for the Pocket by Edmund  Sandars, usefully divided  into Large Birds and Small Birds. I treasured this from the age of about six.

At kindergarten school we had Nature Walks, on which I gathered much botanical expertise, now long-lost, alas. (One of these walks ended abruptly when we had to rush back through the grounds to the air-raid shelters.) Then there was a book by Enid Blyton about a Bird Table - which we duly set up in the garden. There was also the Tawny Owl who came every morning to sit on a stump outside the kitchen window and blink at us having our breakfast.
My acquaintance with Gilbert White must have begun when I was about eight, and a kind neighbour lent me, from among her collection of bird books, a copy of Grant Allen’s edition of The Natural History of Selborne with Edmund New’s fresh, lively drawings. Then for my ninth birthday, my parents (presumably after some pestering) found a copy of The Natural History and Antiquities of Selborne in the plain and sensible Jardine edition of 1853, bought from a classic, dusty old secondhand bookshop, kept by a gentleman who used to have his tea and sandwiches at the back of the shop, while his father  filled the place with pipe-smoke.
I read the book – at least the less erudite parts – till I had chunks of it by heart. Mr White, I felt, talked to one as though to a friend. He was also, I came to realise, an appealing storyteller. His descriptions awoke an obsessive desire to see this magic village of Selborne and all the places he mentions - The Hanger, the Lyth, the Priory, Woolmer Forest, the place where he listened to the Echo....
Three years or so later, Dad took a locum at Buckland (Betchworth), on the main road between Reigate and Dorking, and our valiant mother resolved to take my brother and me on an excursion to Selborne.
People travelled by bus in those days; cars were either for the well-to-do or the Doctor.  Thus our journey lasted over two hours each way, and involved five separate bus journeys: Buckland to Dorking - to Guildford - to  Farnham - to Alton - to Selborne. You could see more from a bus; I remember the impressive view from the high ridge of the Hog's Back.
After reading White’s descriptions of the village, the ride from Alton felt like the approach to a Promised Land. From the green, single-deck Hants & Dorset bus you saw, first, the long, dark contour of Selborne Hanger, instantly recognisable though you'd never seen it before, rising up beyond the fields; then Norton Farmhouse and its now-vanished old barn with the curved-timber-supported porch each side; and at last the thrilling sweep up towards the red-and-white Plestor houses (familiar from the Edmund New illustration), unobstructed by parked cars.

It was the 1st September. Here was Selborne basking in sunshine, and a deep stillness and tranquillity. There was virtually no traffic. The sky was blue, and the only sound was the squealing of the House Martins as they swept through the air.
We visited the Church, dipping under the Great Yew Tree as in a baptism of darkness. I took away a sliver of its bark and kept it faithfully for I don’t know how long. In its shade we found the Trumpeter’s stone, and I think it was on that visit that I bought a copy of Vicar Sunderland’s booklet Trouble at Selborne, about the 1830 riots.  Other  memories of St Mary’s from that day have been absorbed by later ones, but I was intrigued by the ancient Font, from White’s description of ‘three massy round stones, without the least ornament or sculpture’ and the St Francis window. The church looked much less tidy than today, and the memorial screen in the transept had not yet been put in. A postcard was on sale showing the Plestor under snow from the desperate winter of 1946-7 (when burst pipes closed our school for a whole fortnight - oh joy!).
Outside, we found Gilbert White’s grave; the inscription was still clearly legible. By now, however, it was time for lunch. We ate our sandwiches on the Plestor, sitting on the seat around the tree, in the sunshine, the Martins busy overhead. Our memory of those moments was of sunshine, blue sky, house martins wheeling overhead - and utter peace and silence.
Down the Street, The Wakes was still a private house. I remember a white-haired lady opening the front door to visitors as we passed by. Outside the old Butcher’s Shop, White’s lime trees were in leaf – were there three of them then, or two? - and through the Blacksmith’s doorway you could see a shower of sparks in the darkness.
Seventy-two years ago....
It was vital,  of course, to visit The Hanger, and  to climb the Zigzag, not nearly as tidy as it is today. Once at the top we made what we understood to be the required three backwards circuits of the Wishing Stone. We came down again via the Bostal, in the shade of the great, graceful Beech trees growing on that improbably steep slope, and back to the village along Lovers’ Lane. There our too-short day had to end, for it was time for the long return journey.
There’s one last memory. As we sat on the Plestor for our lunch, a passing House  Martin left me a memento on the hand holding my sandwich. Mother laughed and said, ‘That’s supposed to bring you good luck!’
And surely it has.

Your ticket for the: My First Visit