Scott and Amundsen were now in Antarctica and committed to the task ahead, the conquest of the South Geographic Pole. Both expeditions needed to establish their bases which would be their homes during the upcoming Austral winter. They also had to house the dogs and horses and ensure they could survive the cold, dark and blizzards that would soon envelop them.

Amundsen writes: “We had taken 97 dogs on board …. the number had now increased to 116 … The next great problem that confronted use was to find a suitable place on the Barrier for our station”.

The Barrier is a shelf of ice hundreds of metres thick that extends seaward from the Antarctic landmass. Both expeditions were now on the edge of the Barrier, now referred to as the Ross Ice Shelf, but ~400 miles apart as shown in the map below. Amundsen (A) established Framheim (‘heim’ meaning home) on the ice and Scott (S) established his hut at Cape Evans on land. 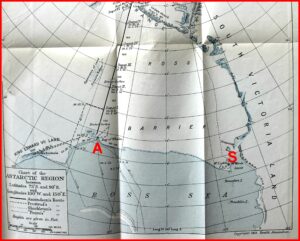 11th January 1911: Scott’s team had been at their Cape Evans base for a week with the hut construction well underway and an ice cave larder several feet across was being dug in to the ice behind the hut. An additional ice cave for observing the earth’s magnetic field was also under construction with a chamber 13’ by 5’. 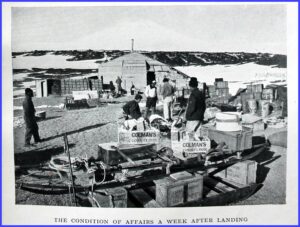 17th January 1911: Scott writes: “We took up our abode in the hut today and are simply overwhelmed with its comfort. It will be a fortnight tomorrow since we arrived ….. and here we are absolutely settled down and ready to start our depot journey”.

“Ponting is the most delighted of men; he declares this is the most beautiful spot he has ever seen and spends all day and most of the night in what he calls ‘gathering it in’ with camera and cinematograph”. 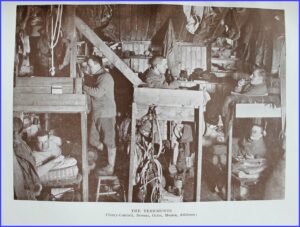 17th January 1911: Just over two miles from where the Fram was moored against the ice Barrier the site for Framheim had been selected and foundations were dug down four feet into the ice. The following day materials for the hut began to arrive at the site being hauled by dogsleds from the ship.

20th January 1911: All of the pre-fabricated hut had now been transferred to the build site and the crew began unloading the expedition equipment and stores. Once the frame and roof of the hut was complete it was tarred and covered in tarred paper to waterproof the structure.

“I withhold my opinion of the dogs, in much doubt as to whether they are going to be a real success – but the ponies are going to be real good. They work with such extraordinary steadiness, stepping out briskly and cheerfully, following in each others tracks. The great drawback is the ease with which they sink in soft snow.”

26th January 1911: Scott writes: “Yesterday I went to the ship with a dog team. All went well till the dogs caught sight of a whale breeching ….. and promptly made for it. It was all we could do to stop them before we reached the water.” The Terra Nova left Cape Evans heading for King Edward VII Land. 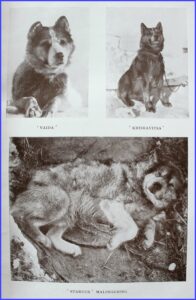 28th January 1911: As Scott’s depot laying party reached the Barrier they saw a dark object and found it to be the tops of two tents, half buried, left by an earlier expedition making an attempt on the Pole led by Sir Ernest Shackleton (Nimrod expedition 1907-1909). A moulting Emperor penguin was sleeping between them. 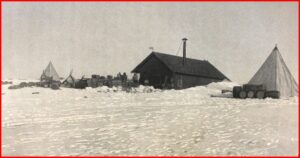 28th January 1911: The cabin at Framheim was completed and the men moved in. Amundsen writes: “What a snug, cosy and cleanly impression it gave us when we entered the door! Bright, new linoleum everywhere – in the kitchen as well as in our living-room ….. It was a happy party that assembled in the hut that first evening, and drank to the future to the music of the gramophone.”

4th February 1911: Amundsen writes: “February 4 was an eventful day ….. Along the edge of the ice, just to the south of the Fram, a large barque lay moored. We had talked of the possibility of meeting the Terra Nova – Captain Scott’s vessel - ….. but it was a great surprise all the same …”

“At nine o’clock we had the great pleasure of receiving Lieutenant Pennell, the commander of the Terra Nova, Lieutenant Campbell, and the surgeon of the expedition, as the first guests in our new home. We spent a couple of very agreeable hours together. Later in the day three of us paid a visit to the Terra Nova and stayed on board to lunch. Our hosts were extremely kind.”

4th February 1911: Scott was unaware of the meeting of the crews of the Terra Nova and the Fram for some time as he was with his own depot laying team. Although in a blizzard at the time he was in good spirits:

“What a wonderful shelter our little tent affords! We have just had an excellent meal, a quiet pipe and a fireside conversation within, almost forgetful for the time of the howling tempest without; - now, as we lie in our bags warm and comfortable one can scarcely realise that hell is on the other side of the thin sheet of canvas that protects us”

10th February 1911: At 9.30am the first of Amundsen’s depot laying expeditions left for the south consisting of four men, three sledges each with ~550lbs of provisions and 18 dogs. The provisions were mostly dog food that was to be left at a depot ready for the polar party later in the year.

“On these depot journeys we were always very glad of our Thermos flasks. In the middle of the day we made a halt and took a cup of scalding hot chocolate.” 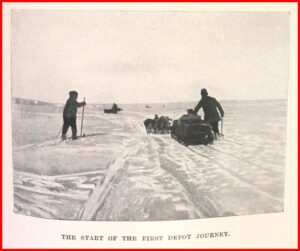 17th February 1911: 79 degrees 29 minutes south. Scott’s team laid the first depot ‘One Ton Depot’ totalling 2181lbs of stores including five sacks of oats and 4 bales of fodder for horses and 250lbs of dog biscuits. Tryggve Gran, a Norwegian, was an expert skier and was part of Scott’s team laying the store depots.

21st February 1911: After laying the depot Scott’s team were heading north back to their huts at Hut Point and then on to Cape Evans. The men were running next to the sledges when the leading dogs encountered a crevasse. The dogs hung in their harnesses in the abyss “howling dismally, suspended in all sorts of fantastic positions and evidently terribly frightened”. “Two by two we hauled the animals up to the sledge and one by one cut them out of their harnesses”.

22nd February 1911: Heading back to Cape Evans Scott received word of Amundsen’s presence in the Bay of Whales. He writes: “One thing only fixes itself definitely in my mind. The proper, as well as the wiser, course for us is to proceed exactly as though this had not happened. To go forward and do our best for the honour of the country without fear or panic. There is no doubt that Amundsen’s plan is a very serious menace to ours. He has a shorter distance to the Pole by 60 miles – I never thought he could have got so many dogs safely to the ice. His plan for running them seems excellent. But above and beyond all he can start his journey early in the season – an impossible condition with ponies”.

“we now have quite enough fresh meat both for ourselves and for all our dogs. For breakfast – eight o’clock – we now have regularly hot cakes with jam. In addition we have bread, butter, cheese and coffee. For dinner we mostly have seal meat and sweets in the form of tinned fruit, tarts and tinned puddings. For supper, seal steak, with whortleberry jam, cheese, bread, butter and coffee. Every Saturday evening a glass of toddy and a cigar. I must frankly confess that I have never lived so well. And the consequence is that we are all in the best of health and I feel certain that the whole enterprise will be crowned with success.”

28th March 1911: The aurora Australis was seen for the first time in the evening and consisted of pale green and red shafts and bands.

31st March 1911: The last depot party of the season left Framheim planning to add additional supplies to the depot at 80 degrees south.

2nd April 1911: Scott records seeing a “splendid aurora …. a bright band of light …. with two waving spirals at the summit”.

11th April 1911: Amundsen writes: “On the night before April 11 something or other fell down in the kitchen – according to Lindstrom a sure sign that the travellers might be expected home that day. And, sure enough, at noon we caught sight of them”.

13th April 1911: Scott’s team arrive back at their main hut at Cape Evans. The expedition carries out several more local supply journeys up to 22nd April when the sledging season is over for them and they settle down to Winter Quarters.

We join the teams again in April, which would have been the Austral Autumn for the expeditions, when they begin to hunker down for the depths of a winter lockdown.

Your ticket for the: Retracing Scott & Amundsen’s journey to the South Pole. Part 4