We’re continuing to follow the two expeditions of Scott and Amundsen as they headed south from the warm waters of the mid Atlantic to the cooler Southern Ocean with their respective crews on the Terra Nova and the Fram. They had already experienced the extreme gales that can be encountered and were now about to feel the cold of the Antarctic continent and it’s seas. 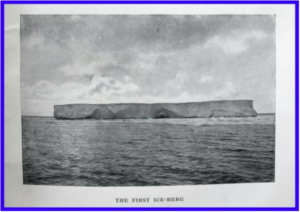 9th December 1910. Scott’s expedition aboard the Terra Nova entered the pack ice. They were through the worst of the storms at sea, but now had to navigate their way through gaps in the ice strewn ocean. Ever present was the risk and fear of hitting the hidden keel of a berg so they proceeded with great care. 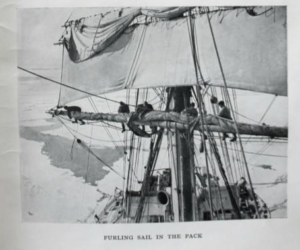 14th December 1910. The Terra Nova was starting to move through sea ice looking for open water to make their way south and members of the expedition team went skiing on a large ice floe which they had anchored the ship to. Scott tried pulling two companions across the snow and found that he could pull 320lbs (145kg), the weight of two men, relatively easily. He was testing ideas as to how to best load sledges for the hauling of supplies to the South Pole. 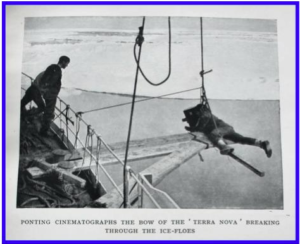 Herbert Ponting was the expedition’s pioneering photographer and cinematographer. He and the crew devised ingenious ways of recording the experiences of the expedition, the moving pictures later produced as a film, short clips of which can be seen as part of the exhibition at the Oates Collections at Gilbert White’s house in Selbourne and copies of the film may also be purchased in the gift shop. 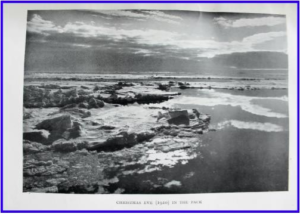 21st December 1910. Edward Wilson went over to the ice floe to capture some penguins and lay flat on the surface. The birds ran up to him to within a few feet then ran away again. They came towards him when he was singing and ran away again when he stopped. 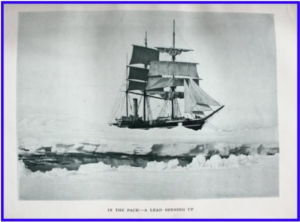 25th December 1910. Christmas day. Scott commented that the scene around them was altogether too Christmassy (they wanted to be in open water, but were stuck in ice). For their Christmas dinner they had: 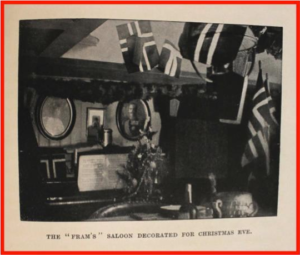 Aboard the Fram Christmas Eve arrived with the finest weather and a smoother sea than had been seen for weeks. Amundsen writes:

“As the day wore on Christmas was in full swing. The fore-cabin was washed and cleaned up till the paint and brass shone with equal brilliance.”

The workroom was decorated with signal flags and the gramophone rigged up as the proposed concert of piano, violin and mandolin had to be abandoned as the piano was badly out of tune.

“Our cosy cabins had a fairy-like appearance in the subdued light of the many-coloured lamps and we were all in the Christmas humour”.

Although Scott’s expedition aboard the Terra Nova had entered the pack ice on the 9th December 1910 it was not until the new year that Amundsen’s team on the Fram encountered ice. 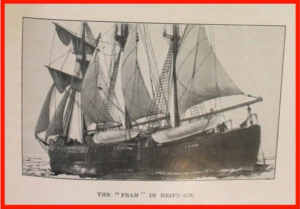 1st January 1911: The Fram meets the first icebergs on its journey south. 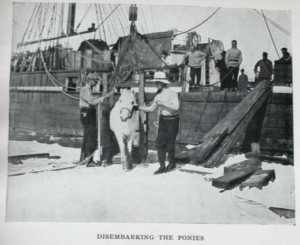 The Ship begins unloading and building a hut on Ross Island amidst brilliant sunshine. Two of the motor sledges were hoisted off the ship and unpacked followed by the ponies. According to Scott:

“there was a good deal of difficulty in getting some of them in to the horse box, but Oates rose to the occasion and got most of them in by persuasion.”

Referring later to when they began using the ponies to pull stores across the snow Scott commented that the ponies were “constantly fretful and the more nervous ones……unmanageable” but that “Oates is splendid with them – I do not know what we should do without him”. 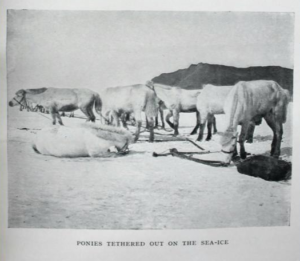 12th January 1911. Scott did six journeys with a five dog team transferring supplies from the Terra Nova to the hut that was under construction. He mentioned that it was not difficult, but that he kept forgetting the Russian words for guiding the dogs at critical moments and indicates that he will need to reorganise the driving of the teams – “we shall learn much on the depot journey”. After eight days they had landed all the stores, the pianola being one of the final items.

14th January 1911 the Fram arrived at the Bay of Whales. They called the harbour “Cape Man’s Head”. The drift ice had delayed them a week in contrast to the month it took Scott’s Terra Nova to navigate the drift a little further west.

We’ll join both expeditions again in January as they set up the huts that will be their homes for many months and where they start to prepare for the journey South.

Your ticket for the: Retracing Scott & Amundsen’s journey to the South Pole. Part 3