Gilbert White is going to the RHS Chelsea Flower Show!

The garden has been designed by Sparsholt’s multiple-medal-winning team in celebration of Gilbert White, a true hero of Hampshire and the natural world to mark the tercentenary of his birth. The exhibit will highlight White’s life’s work and accomplishments observing the natural history around him and demonstrates how important a resource his records remain for us today.

‘The Natural Kalendar’ garden will bring to life phenology – the study of nature’s lifecycles and seasonal variations in climate – from 250 years in the past through to the present day, and its impact on future plant species selection. The theme of climate change will also show how observations by White (1720-1793), the father of ecology, enlightened people to the changing seasons and species activity – findings that are still relevant today.

Visitors to RHS Chelsea Flower Show will be transported from the busy city of London to an idyllic Hampshire scene with this carefully crafted design recreated with extraordinary architectural features from White’s garden and plantings familiar to White’s 18th century home.  Beautiful calligraphy script slate signs, positioned throughout the garden to quote from Gilbert White’s 18th century manuscripts, The Garden Kalendar in combination with cutting edge cultivars from modern day will create the perfect walk through time. 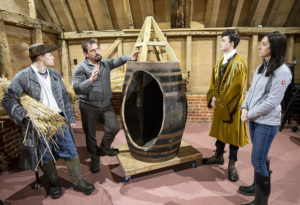 A thatched, spinning ‘Wine Pipe Seat’ made from an old port barrel will be a key element of the exhibit. Originally designed by White to observe the passing environment over long periods, the seat provided protection from wind, a downpour of rain, or burning sunshine. This innovative creation has been transformed from a traditional port barrel by the Sparsholt College team and Simon Richards, Master Thatcher and traditional Hampshire craftsperson who helped build the current seat seen at Gilbert White’s House. The spinning seat will be surrounded by a wild flower turf alike to vast natural meadow found at Selborne.

Other features from White’s garden will include a Ha ha, imitation fruit wall originally used at Selborne to ripen fruit and Melon Frame as a nod to the early melon cultivars that White grew in innovative ‘hot beds’. An Alcove will also be a focus point within the design. Originally constructed in 1760 (as a small timber structure providing a more cost-effective version of a grand stone building) this shelter was used by the White family and friends for entertaining and enjoying the garden views.

The ‘Six Quarters’ feature of the garden will be recreated to contain flowers, herbs and vegetables to reflect the progression to a more modern style of working and kitchen gardens. All plants nearest the garden’s fruit wall are currently grown at Gilbert White’s Garden and would have been familiar to White. The final row of quarter beds will incorporate Gilbert White’s investigative spirit with cutting edge cultivars and project plants that he may have selected for modern conditions including Thompson & Morgan RHS Plant of the Year 2020 entries. 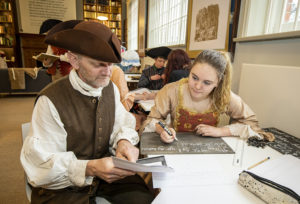 James Bolton, Sparsholt College Student and Construction Team leader commented “I’m so excited about RHS Chelsea because it’s such a prestigious event. As soon as I joined the Horticulture course here at Sparsholt College, I have been looking forward to it! As a young horticulturist it’s such a great opportunity to contribute ideas and to put the skills we have learnt into practice.”

Chris Bird, Horticulture Lecturer at Sparsholt College, said: “We are delighted to be partnering with Gilbert White & The Oates Collections and Thompson & Morgan this year to create Sparsholt’s 2020 RHS Chelsea garden entry ‘The Natural Kalendar’. It’s been wonderful to see this garden come to life around us to celebrate such an occasion as the tercentenary of Gilbert White’s birth in the process. We can’t wait to exhibit our work and for visitors to RHS Chelsea to be as inspired by Gilbert White’s legacy as we are.”

Your ticket for the: Gilbert White is going to the RHS Chelsea Flower Show!

Gilbert White is going to the RHS Chelsea Flower Show!