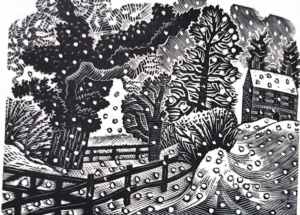 Gilbert White was a clergyman and thus for him Christmas was ultimately a festival of faith. The lead up to Christmas is of course advent, rather than this being associated with opening little doors on your calendar each day; advent was a period of fasting and reflection. White would have preached each Sunday of Advent on the subjects of Death, Judgement, Heaven and Hell, perhaps not very festive, but would have been part of the traditional preparations. Parishioners would have been expected to eat plain foods in preparation for the feasting over Christmas time.

Gilbert White would die just seven years shy of the first Christmas trees arriving in England, but the tradition of decorating your home with evergreens goes back much further. It is possible that White may have created garlands of holly, ivy and mistletoe from his garden to decorate the parlours of his home, much like we do today.

The weather at Christmas could vary as much on Christmas day as it does today, though a white Christmas was far more likely than it is today. On Christmas day in both 1781 Gilbert notes that boys are playing in the churchyard in their shirts it was so mild, whereas in 1787 the snow was a foot deep.

Gilbert White would have woken early on Christmas day and headed straight to church to prepare for his service. In 1751 a young Gilbert was about to give his first Christmas sermon in his home church. He had written one especially for the event, the sermon was a retelling of the nativity story which emphasised the humility of Mary, he asked parishioners to ‘ lay aside all pride, and self-conceit, and worldly wisdom, and pomp and state; and wean our souls, and keep the low, and condescending to people of mean estate.’ He would have been nervous to give a sermon to so many familiar faces that he had grown up with, but sources indicate that Gilbert had a loud easily heard voice and an engaging demeanour, so no doubt would have received plenty of praise and would have hopefully returned home pleased with himself.

White’s diaries show that the rest of the day was not taken over with Christmas traditions. In the past Christmas had been celebrated over twelve days, the emphasis on the 25th December would not take hold for another generation. A century before Christmas festivities had been banned, and many believed still that overindulgence over the Christmas period was inappropriate.  So it is likely that for Gilbert the 25th looked much like any other day. He would have walked from parish to parish, taken note of the weather, wildlife and checked to see how his garden was doing. 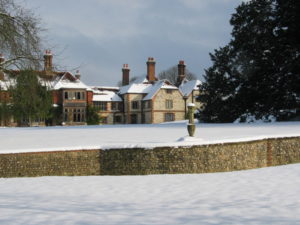 Sometimes Gilbert would be visited by friends or family, for example in 1790 when his nephews Harry and Ben Woods came to stay for a couple of days. Sometimes Gilbert would spend Christmas in London with Benjamin and his large family. White had a lot of family in London, so a trip here would have been a great opportunity to see his family often and enjoy the delights of city, including preaching in some of its churches.

Once it started to get dark White would have returned home and spent the rest of the day, we can only assume by the fire with a book, and knowing Gilbert some raisin wine or port.

A Christmas dinner would have consisted of a turkey or goose or if you were feeling very fancy venison. This would be followed by a plum pudding or Christmas pudding.

Luckily for Gilbert, although there were traditions surrounding gift giving they weren’t as prominent as today. Gilbert towards the end of his life had close to sixty nephews and nieces so would have probably gone bankrupt each December, had he had to buy gifts for each of them.

White often gave to the poor around Christmas time, his account books suggest he gave about 13 shillings of his own modest salary to the poor at Christmas. He may have also treated his servants and their families. We can see Gilbert treating Thomas Hoare and his family to some extra money and perhaps some treats for the table.

So White’s Christmas would have been fairly recognisable to us today. A lot more simple perhaps, but a time to be looked forward to, and to be celebrated in much the same way. 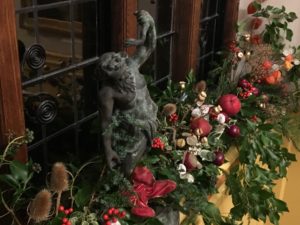 Your ticket for the: Gilbert White’s Christmas