The quiet village of Selborne home to Gilbert White seems quite removed from the famous village of Chawton during the time of Jane Austen, however the lives of these two literary figures were not so disconnected, their lives overlapped by eighteen years and their homes were only four miles from one another. 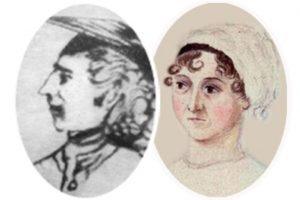 The two famous writers missed each other, but Jane Austen and Gilbert White knew the same people and admired the same sights and both felt at home in this corner of Hampshire, so much so that they produced the work that would be their legacies.
So what are these links and why should any Janeite visiting Hampshire be interested in Selborne?

Gilbert White died at the grand old age of 72 in 1793. Jane at that time was a young 18 year old, the youngest daughter of another Hampshire parson 18 miles away, in Steventon. Jane Austen, her sister, mother and friend moved to Chawton the neighbouring village to Selborne in 1809. Surely by now White had been long forgotten? James Austen (Jane’s eldest brother) wrote a poem in 1812 whilst travelling past Selborne (perhaps visiting his sisters and mother?)

From ‘Selbourne Hanger’ by James Austen

Who talks of rational delight }
When Selbourne’s Hill appears in sight }
And does not think of Gilbert White? }
Such sure he was – by Nature grac’d
With her best gift of genuine taste;
And Providence – which cast his lot
Within this calm, secluded spot,
Plac’d him where best th’enquiring mind
Might study Nature’s works, and find
Within her ever open book
Beauties which others overlook.
Enthusiast sweet! Your vivid style
The attentive reader can beguile
Through many a page, and still excite
An Interest in what you write!
For whilst observant you describe
The habits of the feathery tribe
Their Loves and Wars – their nest and Song,
We never think the tale too long.

White by this time was the David Attenborough of his day. His work ‘The Natural History of Selborne’ was becoming more and more successful, and White was very much a local celebrity in the same way Austen is today.

James would have passed Gilbert’s old house, on the High Street opposite the church. Gilbert never married and the house was still in White family ownership. One local family member was John White, John had had a special relationship with his Uncle Gilbert, born in Gibraltar he was known as Gibraltar Jack and had come to live in Selborne to attend school in Alton, and whilst his parents were away.

Jack saw Selborne very much as a home and Gilbert would have seemed as much a father figure to Jack as Austen may have seemed a maternal figure to Anna Austen or Fanny Knight. In fact we know that Jack helped to copy letters into the manuscript of the Natural History of Selborne. He grew up to be a doctor and we have one reference in 1815 where Jane Austen herself suffering from back pains writes to Cassandra.

‘Thank you, my back has given me scarcely any pain for many days. I have an idea that agitation does it as much harm as fatigue, and that I was ill at the time of your going from the very circumstance of your going. I am nursing myself up now into as beautiful a state as I can, because I hear that Dr. White means to call on me before he leaves the country.’

John wasn’t Austen’s official physician, but may have called in to visit having heard that Miss Austen was unwell.
The White’s were a well known local family, as many of Gilbert’s nephews and nieces had settled in the area, as were the Austen’s so of course there were crossovers, with John often in Selborne and another nephew Edmund the vicar of Newton Valance. At the beginning on June 1811 Anna Austen was due to stay in Farringdon so that she could go to a party on Selborne Common on the King’s Birthday.

‘From Monday to Wednesday Anna is to be engaged at Faringdon, in order that she may come in for the gaieties of Tuesday (the 4th), on Selbourne Common, where there are to be volunteers and felicities of all kinds.’
In the next sentence of Austen’s letter dated 31st May 1811 she writes ‘Harriet B.(Benn) is invited to spend the day with the John Whites, and her father and mother have very kindly undertaken to get Anna invited also.’

The House, in which once Gilbert White lived sits directly below Selborne Common and decades earlier Gilbert and Dr. John White’s father (another John) had cut a zig zag path from Selborne village up to the common, as an easier and quicker route up the steep hanger. Very helpful to Selborne residents going to balls in neighbouring villages.

Although there’s not a huge amount of evidence to suggest that the Austen’s and White’s were connected, they would have known the same places met the same people.

Your ticket for the: Jane Austen and Gilbert White