At the South Pole

On the 17th January 1912 the British team led by Scott reached the South Pole, it had been a long hard journey starting back in 1910. The dream throughout the physical and mental struggles had been in this moment, but the five men Scott, Oates, Wilson, Evans and Bowers weren’t celebrating. 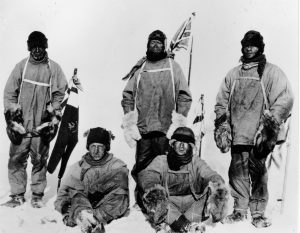 Two days previously Scott the leader of the group has optimistically noted in his diary ‘It is wonderful to think that two long marches would land us at the Pole.’ However there were misgivings the group were worried that the Norwegian explorer Roald Amundsen had already reached the pole, and that all this struggle would be for nothing. Scott carried on to say, ‘The only appalling possibility is the sight of the Norwegian flag forestalling ours.’

The following day their fear was confirmed their fears Bowers’ had spotted something in the snow ahead that didn’t look natural. It was a black flag tied to a sledge bearer, and later the remains of a camp, ski tracks and dog tracks.’ The party knew what this meant; they had done the work but would not get the award of being the first to the pole. In fact they did not know it but the Norwegian team had reached the pole a month earlier on the 14th December.

Eventually they reached the pole and found the remains of Amundsen’s camp, with some abandoned equipment and a letter from Amundsen to Scott.

As you are probably the first to reach this area after us, I will ask you kindly to forward this letter to King Haakon VII.

If you can use any of the articles left in the tent please do not hesitate to do so.

With kind regards wish you a safe return.

Although Amundsen meant well with his letter and needed Scott to forward the letter to prove that Amundsen had indeed been to the pole. But this must have had a patronising effect on Scott who had been so close to standing in Amundsen’s position. The group worked out where the geographic pole was (although there were slightly out), got out their Union Flag, and assembled to have their photograph taken. You can see from the resulting picture, not only the mixed emotions they would have feeling to have finally reached the pole, but to have found the Norwegian flag there, but also the physical condition of the group. They were not getting the calories they need to withstand the severe conditions they were experiencing and the physical strain they were under. They were all suffering from various degrees of frost bite and physical afflictions, Evan would be dead in four weeks’ time and Oates’ only a month later.  Despite all this Oates in particular was looking on the bright side, they had done it, and he was mightily impressed by Amundsen’s effort he wrote in his diary ‘I must say that man must have had his head screwed on right’, Bower’s dismissed Amundsen’s achievement by noting that ‘we have done it by good British man-haulage. This is the traditional British sledging method and this is the greatest journey done by man.’  Wilson, Evans and Scott were really affected by the realisation, they were not the men that discovered the pole, Wilson simply writes ‘A very bitter day.’

After the photo, the group set up their camp and had what they were planning to be a celebratory dinner with a chocolate bar each they had been saving for the occasion.  The group would have gone to their sleeping bags with the group thinking about the challenge ahead, doing the journey again, this time back to base and eventually home. But with the knowledge of what they had already been through, home must have seemed very far away. Scott notes in his diary ‘I wonder if we can do it.’

Your ticket for the: At the South Pole

At the South Pole